1. Tournament early entry fee, paid by December 23rd, is $2,500.00 per boat. Two anglers are included in the $2,500.00 entry.  An additional angler may be added for a maximum total of 3. The third angler fee is $300.00. After December 23rd, the entry is $2800.00 per boat of two anglers and the third angler fee is $350.00. The entry fee includes Florida state sales tax, dinners and gifts for anglers, captain and mate.  The entry fee is non-refundable unless a written request is received at least 30 days prior to the start of the tournament. After that, refunds will be made only if approved by the tournament committee.   Additional social tickets may be purchased at the Islamorada Fishing Club.

2. Islamorada Fishing Club’s Sailfish Tournament rules shall be strictly adhered to and all decisions of the Rules Committee are absolute and final.

3. The Tournament Committee must approve any substitutions of anglers.

4. This is a “BOAT” tournament with a release format. 100 points will be awarded to each released sailfish. The “BOAT” accumulating the most release points first, will be judged the winner.

5. IGFA rules will apply unless otherwise stated below.

6. Lines in, other than bait catching, at 8:00 AM and lines out at 4:00 PM. No larger than manufacturer’s stated 20-lb. test line may be used. No more than six (6) lines can be in the water at any time. This restriction does not include teaser lines. A fish may be fought after lines out provided it has been reported to and acknowledged by the Committee Boat prior to lines out of the water. Any fish being fought after lines out must be released by 5:00 PM or it will be disqualified from the tournament. There is no time limit as to when the boat must return to the dock.

7. Only non-offset circle hooks may be used on live or dead baits

8. In the event of multiple hookups on separate lines by a single angler, all released fish can be scored and single anglers may fight multiple fish utilizing the rod holders.

9. All boats must depart from and return to the same dock each day.

11. In order to qualify a fish as having been caught and released the following conditions must be met: after the fish is released, the captain, mate or angler, must retain the leader or a portion thereof.  The terminal line for each fish caught, including the leader, double line and at least three feet of the standing line must be provided to the Committee Boat.

12. Chumming is prohibited throughout the course of this tournament.  Any bait, or portion thereof, not being fished or used as a teaser, shall be retained within the vessel. In addition, any vessel participating in this tournament shall not permit any other vessel to chum on their behalf. This does not prohibit trolling or anchoring with a chum bag in the water to attract baitfish.

13. Only registered anglers may cast baits to fish.

15. SPA Rule. Other than bait catching with the proper permits, no vessel will be allowed to engage in any fishing activity inside of a Special Preservation Area of the National Marine Sanctuary (SPA marked by four yellow balls). If you hook up a sailfish and in the course of the fight the fish enters a Special Preservation Area you may not pursue it into the SPA with your vessel or your fish will be disqualified.  The fish is allowed in the SPA. Your vessel is not.

16. Any protests concerning the tournament must be made in writing by 5:15 PM.

19. Participants in this tournament enter at their own risk. Officials, committee members, sponsors and all persons connected directly or indirectly with the operation of the Islamorada Fishing Club  Sailfish Tournament shall be exempt from any liability for loss, damage, negligence, harm or injury suffered to any participant, entrant, sportfishing vessel, their companions, boat captains, crew members, vessels and equipment, which may occur during this tournament. 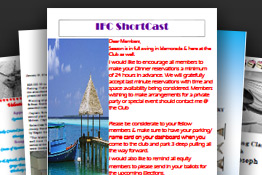