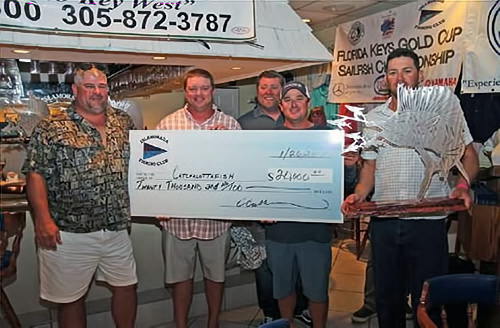 January 26, 2017 | $20,000.00 in cash plus prizes were awarded to Team Catchalottafish, winners of the 2017 Islamorada Fishing Clubs January Sailfish Tournament on January 26th with a field of 18 boats.

We were very happy with the attendance this year. There were 36 sailfish released in this one day event. The awards that were presented was original Art by Fish Bone Designs Winning trophies were presented to Billy Wood, Lee Robertson, & Bill Walters with 6 releases.

Catchalottafish Captain James Chappell & His Mate Drew Rhonehouse were also awarded custom original trophies & a check for $20,000.00 Relentless was the winner of the 2017 Gold Cup Series. 2015 IFC Snook and Redfish Smack Down

Even though it was a blustery day, this year’s IFC Snook and Redfish Smack Down had some great anglers and some great fishing!

Rob Preihs won overall Most Smack Downs with 13 combos of reds and snook! He also took home Most Snook Men at 13 and Most Reds Men with 16 fish.

Linda Denkert won Most Snook Women with 8 and Most Reds Women with one red and that was on time. Completing the awards roster is Asher Cockerham with Most Snook Junior Division releasing 7 nice snook. Everyone enjoyed Chef Joseph’s wonderful barbeque and ribs after a long day of fishing.

Look for next year’s IFC Snook and Redfish Smack Down coming in October 2016! Enter the family in the Men’s, Women’s or Junior Divisions!